Where to start. I am very lucky as a singer to be given the opportunity to go on the most exciting tours to the most exciting places. Sometimes you can’t quite believe that you get to visit these places for free. Admittedly you have to sing for your supper but I’m sure any singer would tell you that if you don’t love to sing you probably shouldn’t be in a choir. As oppose to being an instrumentalist, as a singer, tour can really hit your instrument hard, what with the late nights, alcohol, air conditioning, travelling, and in this case sightreading. I’m certainly not complaining that my first task as a member of Cauis College Choir, Cambridge was a trip to Brazil, although I won’t deny it was pretty daunting plunging head first into a choir that was already fully formed as the one new member. However if you’re going to get to know people there is no better way than a small contained space flying through the air for 18hours where people are getting less and less aware of which time zone they’re in let alone sleeping. At least you’re all as disorientated at this point as each other. In fact my whole experience was made a lot easier by the fact that I was probably constantly bouncing around during the tour, dosed up with caffeine in a bid to stay awake. This was not just because Brazilians (and In São PAolo in particular) make the best coffee, but also we needed it what with the 2 overnight coach rides to and from Rio, the fact we never got a chance to recover from the first set of flights until we hit the second and necessity to stay up each night drinking Caipirinhas.

Incidentally Caipirinhas were my first Brazilian discovery. Caipirinhas are a cocktail made from crushed limes, sugar and the local alcoholic spirit, Cachaca, a spirit made from distilled sugar cane in a similar way to rum. The main difference between rum and cachaca is that cachaca is made from sugarcane juice whereas rum is made from the by product of sugarcane, molasses, so tends to be stronger usually and ages better. There is no better thing to drink in Brazil, this cocktail encapsulates the Rio laid back lifestyle. The best way to drink it is on Ipanema beach as the sun goes down while switching between dancing in a free Zumba class and swimming in the sea, which incidentally we did. However Caipirinhas are not just a one trick pony. On our first night in Brazil we were thrown a huge barbecue ( this may have also contributed to the necessity for caffeine consumption) where a batman would make us any type of Caipirinha that we liked, ranging from tangerine and chilli to passion fruit and ginger, made not just from cachaca (which I stuck to) but also gin, sake, vodka, anything we liked.

It was at this barbecue that we gained our first experience of the abundance of salty goodness that is Brazilian cuisine. I may have had a huge lunch complete with chocolate. Are but that wasn’t going to stop me digging into the griddled halloumi, blackened and bubbling, the melting slices of rare beef, dipped in an addictive breadcrumb like farofa (fried cassava flour), the crime de Milho (sweetcorn cream stuff) or the bite size salty morsels, chicken hearts (I kid you not these delicious). Then of course there were the puddings which I am ashamed to say I barely made a dent in. While I tried the stuff of heaven, coconut ice cream, and the suffocatingly sweet brigadoo (condensed milk and chocolate truffles) I failed to try any of the array of cakes or passion fruit tart. I believe I missed out on half the savoury dishes I didn’t even see, take me back!

This wasn’t the only time we would be presented with an array of new and exciting foods which somehow seem to surpass all British food in flavour. On our first day sightseeing in São Paolo we were taken to Mercado Municipal, a food market on supreme scale
. 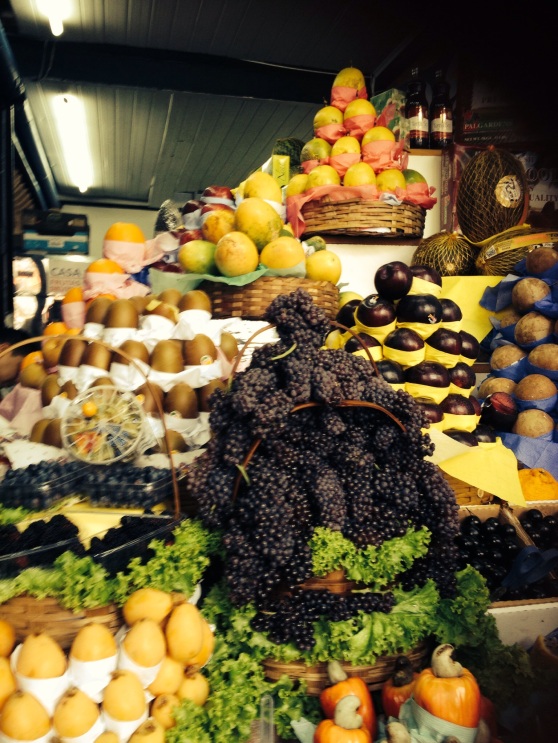 I had not even heard of half the fruit on the stalls, let alone tasted or seen them before
. 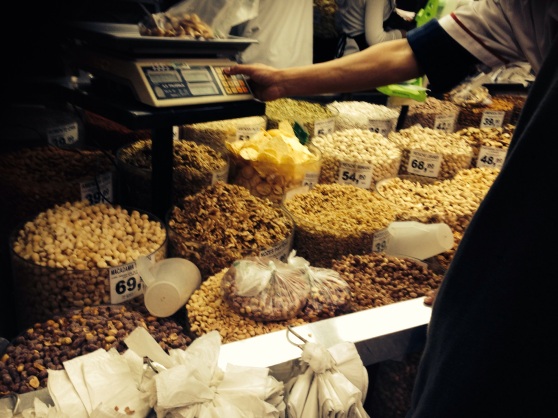 I’m not entirely sure how they make money considering every time we passed a store we were given pieces of fruit, salted cod, Viagra (wasabi covered peanuts) for free but presumably they were trying to entice us even if we didn’t buy anything. Having said that one of the Irish men on the way into the centre had bought dates that tasted something along the lines of cake mix, I kid you not. I recommend travelling to São Paolo for those dates.

The next foodie experience (other than the time out choirmaster turned on a mostly unbreakfasted crowd to suggest we skip lunch, whereupon we started debating who we would eat first if it came down to it) was the staple meal for the next three days of tour. We turned up at the university (which had already been on strike for 3 months) and were given rice, beans, salad, chicken or beef. We guzzled it down gratefully having not slept the night before and were expected to go straight into an interactive Brazilian workshop. Little were we to know we be give this meal for once a day for the subsequent meals for the remainder of tour, oh well, it was free food. Having said this, grey beans, salad, salty chicken and chips are not necessarily a food of choice, the frozen yoghurt at the canteen, however, was above par and served with fruit almost forcing you to be healthy.

Our trip could not have ended in a stranger way. We ended up on Miami beach…. For the day….
Having said that, the Americans know how to cook. We arrived and most of us( ok mostly just me) were excited for a 3 course brunch however Miami was apparently deserted, or maybe that was just the area we were in. But I am Not kidding when we eventually found brunch, it was GREAT . Not only do Americans understand the importance of an iPhone charger at every venue, but the pancakes,eggs, Mexican eggs, smoothies, coffee and acai( a type of berry) were amazing, I won’t even get started on the maxi version of a sundae (small if you are American). Miami is not just for the food I hear though. I didn’t have a bad time at the beach, it may even be worth it for the white beaches and bath temperature waters, but then I’m a foodie, what would I know.
I cannot wait to get back to Brazil, although maybe to try a slightly more varied version of the food. The extremes of amazing food and mediocre food (never bad) is worth exploring. Plus I notice a niche in the market for condensed milk chocolates and more coffee in England. So much strong coffee. Five Cups a day in England don’t even cut it.