If you go down to the woods today…

So as you may have realised from this blog I am generally not very good at spontaneity. Of course this is a benefit when it comes to cooking elaborate 5 course dinners…. but generally as a student I am learning to juggle everything with a tight schedule and a bit of spontaneity every now and then is a welcome stress release. Of course spontaneity can vary from taking a long cycle ride, heading to the museum or in my case soaking gummy bears in gin….
It was one of those weird afternoons following brunch when I wanted a snack because I can’t cope with only having two meals a day, so stopped off for a healthy cereal bar. Of course I met my friend who suggested tangfastics were a more juvenile approach and I should probably start acting like the kid I feel like inside rather than the mature soon to be graduate I actually am. Upon spotting the gummy bears I mused that I had always wanted to try gummy bears in vodka having read they grow to about 4 times in size, he suggested we actually try it. Of course I only had gin (being more a g and t girl than a vodka coke) so we used that instead. A few days later and all I can say is that half a packet of gummy bears engorged to the size of a key with gin, makes for rather good pre-drinking. 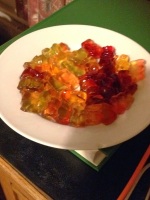 Same friend, different experiment. Following on from the successful gin gummy bears, we decided to try the much talked about skittle vodka. Deciding that skittles wouldn’t make our final vodka enough like sours, we used skittle sours. Trying not to eat too many we skilfully divided all the skittles into colours, this was the fun part, brought out the ocd in us, I think all Cambridge students have it a little. We then downed 5 bottles of fizzy water and filled up with vodka, I’ll keep you updated on the results 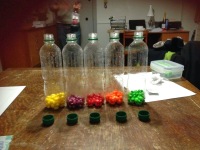 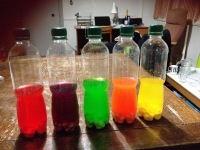 In another note, same friend and I headed to chophouse again (I am not normally this decadent) and had the exciting sharing plate. I have been wanting to try this for a while but this plate is rather difficult to share between four…much better between two.

Venison Pate with sweetcorn relish and brown sourdough, possibly my favourite part of the dish , meaty and chunky, balanced by the tangy relish. Then there was the pork crackling, crunchy and salty – not quite up their with the maypole’s but then the maypole is specifically tailored for drunken munchies. The cheese, I was assured, was very good cheddar, as detailed many times, I am not a cheese fan. Likewise personally I wasn’t such a fan of the gammon although that is more personal taste as it was smokey and I’m sure hit the spots for more of a gammon lover. I am always a big fan of cured salmon, especially beetroot cured and this was good, although I think it was sliced a little thinly, I think cured salmon tastes better a little thicker so you can taste how much meatier it is than smoked salmon and not so salty but they still did well, plus good value for money, we were stuffed.

In some sort of crazy plan to try and actually stay healthy this year, I have decided to start juicing for breakfast. Well that and also wanting to constantly use my shiny new blender which works so fast the bigger stress about making this juice is washing up and it works out a lot cheaper than the pret a manger   version. Having tried and failed a almost totally veg juice ( U7 as my faithful taste tester informed me it was a little lacking in flavour…)
The great thing about this juice is that it is tasty but also makes you glow.

Blitz all the ingredients in a blender, adjust orange juice and water to taste and texture, pour into bottles and chill. Hey presto healthy breakfast on the run for a week 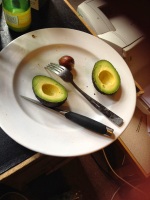 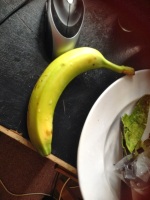