So here it is. The last proper day of my holidays and with it the last single lunch review I will be doing for a while. Next week whilst I am not going back to school after a luxurious week of holiday – yes I did spend most of this week sleeping- I am off to intern at Delicious Magazine in hope that sometime in the next ten years they might have an opening for a job…. Unfortunately I have realised that much as I am enjoying a weekly solo lunch adventure there is simply not enough restaurants in Oxford that are independent and affordable and also I’m lucky enough to boast that my social engagements have overtaken the ability for time to myself. I’m aware this isn’t a bad thing. Of course I’ll still be reviewing. There is a rather favourable review of a Hampstead Heath gastropub on its way, a date with my ex housemate, watch this space.

At least I’ve chosen a rather nice way to finish the holidays. It is a beautiful day in Oxford. It’s cliche, but the architecture in Oxford does seem that bit more impressive against a clear blue backdrop. It’s as if those grey rainy days were merely a rehearsal for the really performance. It’s just a shame that this often feels like a once a year show. I’ve whipped out my new sunglasses, I’ve dusted off my spring coat (let’s not get ahead of ourselves, we are still in England, a coat is necessary) and I’ve headed to The Rose. A staple of the Oxford afternoon tea scene, I happened to come across a review which said it was the best lunch in Oxford. However as I sat for a rather late lunch in the window basked in sunlight, people watching the street, my heart sank when I looked at the menu. The goats cheese salad whipped into memory a weedy limp salad leaf attempt from a health care I’d had a few weeks ago. The ciabatta sandwich options suggested the dry thin offerings from various sandwich outlets around and reminded me why I never order ciabatta if offered. The £6.95 charge for a plate of ‘home cured salmon’ which sounded suspiciously like 3 slices of Sainsbury’s finest laid on a plate, taking barely 5minutes to eat. But…..I am prepared to stand up and admit how wrong I was. Just to be clear. This is the place that all the aforementioned cafes should take their cue from. This is the place where the menu doesn’t lie. In case you need it in bold letters BEST LUNCH IN OXFORD.

I chose the home cured salmon and asked for some bread and butter on the side with some trepidation as the only offering for bread was ciabatta. I sat undisturbed for an hour and a half reading The Versions of Us (an excellent book by the way) and enjoyed a large salad plate, loaded with salty gravlax trimmings with dill. Pesto and an excellent shallot dressing. It was accompanied by warm, soft ciabatta and excellent creamy yellow butter. I could well have eaten a couple more rolls. I don’t eat bread a lot but when it tastes that good…. I consoled myself that I only had the one ciabatta by ordering some cake. Again I’m not usually that into cake, I prefer a bar of chocolate or a creamy dessert if I’m going to treat myself but I thought if the bread is that good and they call themselves an afternoon tea shop, the cake is probably pretty damn good. I was not disappointed. An incredibly moist carrot cake studded with walnuts with the thinnest spreading of tangy cream cheese icing cutting through the sweetness but without making the cake too rich. My only criticism is that the staff could have been a little more attentive especially as I was only given a small glass of water which I finished pretty quickly and had to keep waving to try and get refills despite the cafe being pretty quiet at this time. But it’s only a little thing and mostly the staff were friendly and helpful and clearly knew the dishes which is always a bonus. And for a total of £12, I will certainly be coming back. 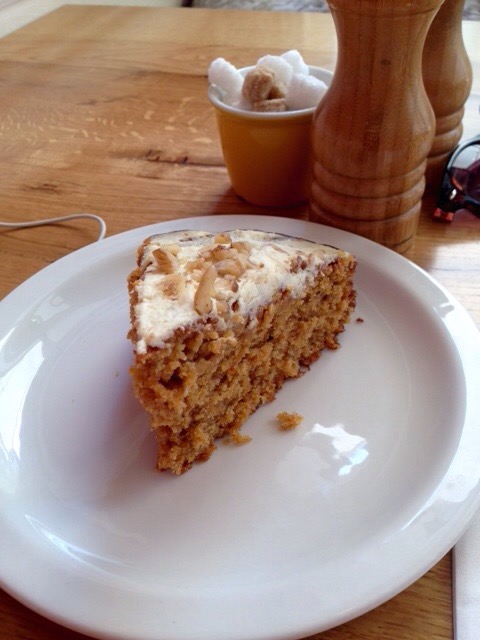