Everybody needs good neighbours
It is always an exciting moment when the neighbours come to dinner. I’d been asking my parents to throw a dinner party for ages and as an added bonus the neighbour is a fellow foodie! So since the Great British Menu website had been so successful for the Dean’s dinner I decided to replicate that success. They turned up for dinner with the man who lives upstairs thrown in for good measure and I started my cooking following a couple of glasses of champagne and a little conversation.
My opening dilemma was that of the plates. I didn’t have enough for both starter and pudding of the square variety and my mothers suggestion that I just ‘wash them up’ led to a lecture from me that I wasn’t Cinderella and was in fact doing this party for them out of the goodness of my heart. (Who am I kidding, its more fun for me than them!) After this she kindly conjured up some extra plates from somewhere and preparation could begin. I pretty much prepped everything before(the biggest secret of my dinner parties). For the starter I had decided on goats cheese, beetroot and olive tuile. http://www.greatbritishchefs.com/recipes/goats-cheese-recipe-beetroot-black-oliveI made the mousse (filling my beloved piping bags) and chopped the beetroot with ease and the balsamic glaze was easy too. The tuile I approached with difficulty. My hands may be somewhat numbed thanks to years of thinking I was too good for oven gloves but it is still a challenge to shape tuiles when they are incredibly hot but harden as soon as they cool. I think if I made tuiles again I would invest in a silicon mat, because the hardest part was making the mixture thin enough on the baking tray and a silicon mat would have helped this process as well as allowing me to shape it without leaving burns all over my fingers. After about 7 attempts I had enough misshapen tuiles to pass off in the starter and actually felt rather proud that I had been teaching myself more diverse techniques. Yes they looked like slightly odd pieces of bark but I decided that added to the charm of the plate. I designed the plate once again in what my sister calls my Modrian style. 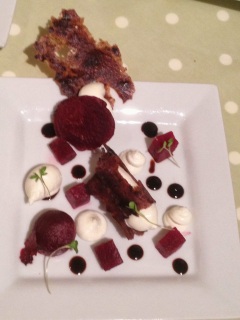 The main was my Achilles heel. The main course at the last party had been a little cold because I had taken too long plating up and here with my braised pork, wild mushroom and fondant potato it was going to be hard making the greyish meat look attractive. (I hasten to add here that apparently this was delicious, think pulled pork) http://www.greatbritishchefs.com/recipes/pork-neck-recipe-wild-mushrooms-wild-garlicThe other issue I had had earlier that week was the lack of wild garlic in early September. So I messed around a little with the recipe (apologies Christoffer Hruskova). Luckily there is a very good butcher and fruit and veg stall near where I live so I managed to get the pork neck (a lovely cheap meat by the way) and a lovely mix of wild mushrooms, dried. As a pitiful compromise for the lack of wild garlic I decided to use a mix of normal garlic and spinach. That and rehydrating the mushrooms overnight made up for the lack of ingredients plus the smell of the mushrooms was amazing as they rehydrated. I also substituted the berries with goji berries (apparently a superfood) and figured truffle was too expensive so used truffle oil instead. This was almost the most successful dish of the evening.
However the real success was the mango millefeuille. For the main course my dad had opened the really good red wine and I was one glass down as I plated this up, I think it added to the overall rugged charm of the plate. An unusual dish, this veered away from my usual devotion to modern French style cooking. My dad was even keen on the caramelized chilli (I expect the gold leaf on top helped too, people are generally like magpies).  http://www.greatbritishchefs.com/recipes/caramel-mille-feuille-recipe-mango-chilliAdmittedly the pastry sheets I made were on the more obese side than the ones in Frances Atkins’ picture, and there was slightly less gold leaf, but the neighbor sent a nice card over afterwards so I must have done something right. 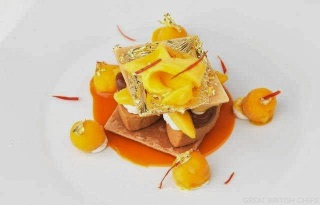 (their photo not mine)