My mother had the wonderful opportunity this year to work in Paris for a couple of weekends. Being the fair, equal rights sort of person that she is, we each got a weekend. She first took my dad (only fair, he is the oldest), then my sister got a chance and finally me. The only issue was that she happened to pick the weekend right at the end of term, but just before choir tour so naturally all the musicians in the university had been in the pub the night before. I had to be in London early for the Eurostar so I of course just dragged myself out of bed without bothering with make-up or contact lenses or brushing my hair for that matter, figuring I could do that all on the train, and anyone up at that hour was crazy anyway so they wouldn’t care what I looked like. What I had failed to factor in was the large number of people with a similar agenda leaving Cambridge on the same train. Not only was there no space, let alone a seat for me to make myself look like a normal human being, but also I was forced to make conversation all the way down to London looking like a trampled hag.
This wasn’t the only issue of the downward journey. I had forgotten my phone with the wilful ease of someone who believes a phone wouldn’t be necessary and that it might be nice to have a couple of days detoxing from constant communication. A brilliant idea but I now had no way to contact my mum who I was meant to be meeting somewhere in the vague interior of St Pancras. There was less than 30mins to go before the Eurostar left when I finally decided that I had no option but to ask the nearest policeman to borrow his IPhone, sometimes it helps to be an innocent looking girl. 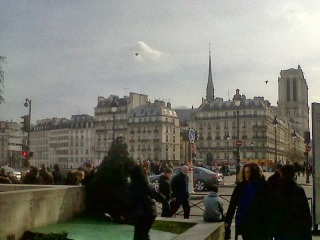 When we finally arrived in Paris I was left to wander while my mother did the work she was actually there to do. There was only one thing on my mind. Macaroons. I spent the entire afternoon on a blissful macaroon tour of Paris. I would spot a patisserie, wander inside, assess the quality of the macaroons and if I liked the look I would buy one (I think I totalled 8, which is a lot of sugar for one afternoon). There’s something about French macaroons that Marks and Spencers just can’t replicate. The flavour sensation is so much more vibrant and the texture is sublime. I find it hard to knock Pistachio off the top spot for flavour but the unique carrot and orange flavour I had at one place or the cassis from another almost did. In fact the only macaroon that disappointed (and we are talking very little as I find it hard to be disappointed in any macaroon) was the praline, it lacked the intense flavour of the others.
All in all as I wandered round Paris I discovered one thing, the French are as obsessed with food as I am. They sell everything with either sexy poses or food. Handbags are surrounded by cupcakes and mannequins are adorned with baguettes. If only I had actually taken French GCSE I would happily move to Paris for good. 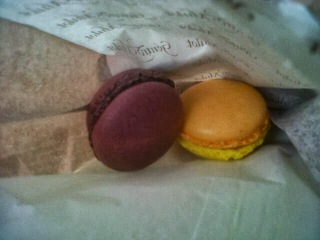