Formal – Caius – Oh dear God!
(I’m joking a little there were a few great moments – and it is cheaper than Kings, possibly better student food)

Caius college, Cambridge is not famed for its food (despite what master chef would have us believe). One memorable occasion at Caius (my first experience of the so called ‘formal’ hall – more like informal -) was at, what I presume, was an annual Caribbean hall. Except instead of giving us a unique and informative experience of a cuisine the majority of the hall would be unfamiliar with, we ended up with banana chips as the side dish for the main (breakfast food) and a boozy ice cream, which felt a little bit like they had just doused vanilla and raisins with as much alcohol they could to hide the bland taste. Another colourful experience was where I feeling clever at duping the system by opting for vegetarian (known the meat option would inevitably be overcooked) I was rather disappointed when I was presented with a plate of pasta and tomato sauce, which would have been alright, except my friend across the table was tucking into chicken, bacon and (you guessed it) pasta and tomato sauce, effectively saying vegetarians are worth half the meat eater…….

However this time I walked in with an open mind, after all they had been featured on the master chef final….It was filling

Caius covers all the basics and on the initial menu read it sounds incredibly exciting:

I would love to know how Caius manage to:*
– make the bread look so good, yet feel so stale?
– serve the roast potatoes both burnt and soggy
– leave most things devoid of flavour
* disclaimer – my opinion and probably better for a student budget and tastebuds anyway

I sat at a table with several seasoned Caius hall veterans as Caius students are forced to have a certain number of these sit down meals per term. They knew the form, whether to go for soup or salad, when to turn your nose up at dessert and wait for the muller rice and when really desperate, you can always cover your meal with the huge mound of ketchup/mayonnaise/salad cream sachets in the middle of the table at every formal. We started with a coronation chicken salad which was actually alright. Despite the slightly limp presentation and lettuce leaves it had some juicy sultanas and the sauce was tangy and thick. However this was slightly let down by the stale bread and pitiful amount of butter, I was hungry coming to this formal from a busy day.

The main was brought promptly (Caius tend to bring things possibly a little too promptly, you feel quite rushed…but at least it means you can get on with your evenings for us busy students) along with dishes laden with potatoes and cabbage which I appreciate because I often wish I had more of a certain thing on a dish. This was slightly let down by the fact the side dishes weren’t inspiring. The cabbage was just cabbage, I can’t fault it except cabbage on its own is never going to be anyones favourite dish and I think everyone would have appreciated salt, butter or in fact anything on that cabbage to make it taste a little less like textured water. The roast potatoes were soggy, yet burnt, although maybe they were trying to evoke the nostalgia of school food pre Jamie Oliver (kids of the 90s), I almost enjoyed them just for old times’ sake.

The highlight of the main course was the yorkshire pudding. They had done rather well. It was crispy on top without being burnt and the bottom was soggy in the gravy, but not tough. However it would have been improved even more if we’d been given more gravy, the yorkshire itself was bland (as it should be) and the lack of gravy in which to dip it was lamentable. The beef itself was very very chewy. I’m sure they were trying to cater to everyone’s taste (I understand there are people out there who don’t like to have their steak practically blue) and that it is hard when you’re mass catering to cook anything well but I think you should at least be able to have a conversation while trying to make your way through your meal. The best method for dealing with the main course was a ton of salt, it almost disguised the dodgy textures and definitely made it taste of something.

I really liked the dessert. It may have been leftover brunch, I don’t know (my friend next to me commented that she was sure they had just put Pret’s brunch pot into a bowl). But despite the fact the majority of our group agreed a stodgy pud would have been more suited to the weather, it was tasty and well balanced. The yoghurt was tangy, the cherry coulis was sweet and chunky with fruit and the granola was crunchy with toasted flaked almonds. It may not have been the formal food, but I would have happily eaten that brunch pot any day.

Caius hall is certainly an experience, it just strikes me that the concept of formal hall is pointless if you’re just going to serve cafeteria style food. On the other hand keep making the yoghurt pots and maybe patent the unique take on the roast potato, I’m almost certain no-one has made it quite the same way before. 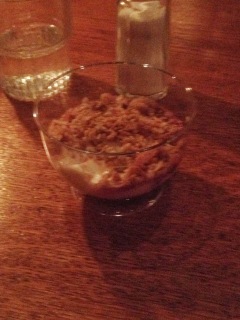