So after the pomp and circumstance of Kings and they relative casualness of Cauis, I was relieved to be attending a mid priced, tasty meal with the air of formality aided by a compulsory suit dress code and fully plated courses. The first impression of soft white bread with a moderate amount of butter was tasty and simple.

Since it was the last formal of term ( and the red haired lady was visiting)  I splashed out and got the most expensive wine, a £10 bottle of merlot. (plus the food was free because I’d just sung for 4 hours that afternoon for the college).

You also tend to feel quite special at these formals because they write out the menu in a fancy card with a short history of a particular aspect of the college. We were all a little bemused as to why we would need a fish knife for a prawn cocktail, but we figured that the college had bought a set and decided that they would therefore use them as much as possible, with any excuse.

The prawn cocktail itself had a nice sauce, tangy marie rose with a spicy kick on the top with a little paprika, but it was let down quite a lot by the sad, freshly defrosted prawns which felt as fake as the ones you pick up in sainsburys under the premise of ‘fresh fish’ that taste far to fishy for freshly peeled prawns. The lettuce leaf selection could also have been a bit more exciting. 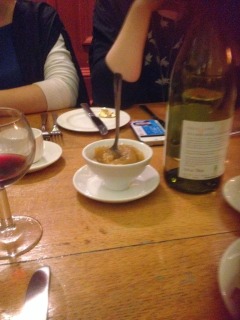 I do like Sunday formal because it generally means a roast, which nostalgically reminds me of my childhood when this would happen every sunday. Todays roast was Pork with Apple sauce. Sidney usually does ok on the cooking front, its not as chewy as Caius, but it’s certainly not absolutely perfect. Likewise the veg was pitifully watery and under flavoured, requiring a lot of salt. But there were two things that however completely redeemed this dish, the gravy which was plentiful and fairly tasty, and the brilliant roast potatoes, well seasoned (herbs and all) and so crunchy and fluffy, very tasty. 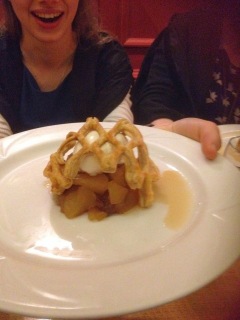 The pastry chef at Sidney has a flair for presentation and often it is almost restaurant style, with its mousses and printed chocolate. (Never over the top on foams etc but well presented and tasty) This dessert was tasty, I particularly enjoyed the bite in the apples, which were quite sweet against the creamy creme fraiche and then the pastry was well cooked, there was clearly a good attempt at presentation, but a simple apple tart would be just as smart and probably less weirdly constructed.