Macaroons: 2
Every year my family and I make the huge journey from Oxford to London for an annual christmas shopping trip. We try our best to pretend that we only go up to London once a year (despite the fact my sister now lives there) and plan the trip months in advance. It’s all terribly exciting…. The secret to this shopping trip to prevent the inevitable stress of actually shopping 5 days before christmas on Oxford street, is not to actually buy anything. The hour we spend in Topshop London is about the extent my father can cope with in a shop that isn’t a suit shop or Fortnum and Mason (this year he managed to buy £8 worth of Turkish Delight despite the fact he is the only one in our extended family who likes it). So we tend to potter around, look at the window displays (I go around and gawp at the Selfridges and Fortnum and Mason food halls), do a final mad dash round John Lewis when we realise we haven’t actually bought anything and end up collapsed in a heap in Waterstones coffee shop.

This year I was delivered some welcome respite in the form of a Champagne and Macaroon date with the red haired friend to celebrate her 21st. I wasn’t sure what to expect really when I eventually found my way to Eric Lanlard’s patisserie, Cake Boy. It appeared to be at the bottom of an office block surrounded by a busy roundabout and residential area, I was pretty sure it was the only shop for miles. Once we got in though, it was very modern and smart. This vibe was matched when our macaroons turned up, accompanied by a glass of lovely champagne.

The plate was so much more than your average plate of macaroons, with a piece of modern art made of chocolate, caramel, raspberry coulis, popping candy, freeze dried raspberry and cocoa nibs underneath the macaroons themselves. It was rather nice to be able to taste the plate as well as the actual macaroons themselves. the flavours they described to us sounded incredibly interesting, including lemon and white chocolate, lime and kinnow, chocolate and caramel and raspberry. However it was a bit of a shame that, while they were all well baked and tasty, most of them were just sweet and the main flavours you could taste were the lemon, chocolate and caramel. But then again I have been spoiled by french macaroons bursting with flavour.

l’Escargot, as my father helpfully pointed out, means snails, so the assumption would be that this was a french bistro, however L’Escargot is so much more. It manages to bridge the awkward gap between michelin starred expensiveness and dynamic innovations (and sometimes pretentiousness), and the casualness and lack of finesse you get in other places, not to mention the repetitiveness of chain restaurants. It was perfect for a celebratory meal. Most places I’ve been to of a similar price (not very cheap but nowhere near michelin prices) tend to underwhelm on the food for what you’re given, but in this case the food and service impressed.

We were not only celebrating managing to get to the end of the shopping trip and the first time we had all been together in a very long time, but my sister also received her first ever job offer, so we started off the meal with something bubbly. The staff were incredibly helpful and attentive, not only taking all our shopping bags and sopping wet coats as soon as we got in the door, but also charging my phone while we ate our meal. They had the level of attentiveness that I would expect in a michelin starred restaurant (filling up water glasses a lot, pushing chairs in/ laying napkins, refilling wine) but importantly didn’t force bottled water on us (they were perfectly happy for us to have tap) and nor did they push the most expensive food/wine choices on us.

After agreeing on a white wine to go with our various choices, we were pretty much left alone, excepting when we were offered 3 different types of bread (olive, brown, white) all warm with sea salted butter (no additional expense). The olive bread I had was particularly morish, clearly made with olive oil, and we kept being offered more (I did decline with the knowledge that christmas with its’ gut busting mounds of food was just round the corner).
When are starters arrived my first thought was, not too big not too small. Mine came with huge chunky tempura prawns, a lovely light crisp batter with a marie rose sauce, a sort of gourmet fish and chip shop fare. But this gave way to a lovely crab mayonnaise, light on the mayonnaise, heavy on the crab, with a nugget of avocado underneath, lovely. 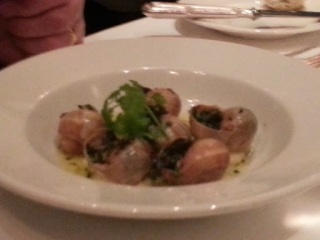 My Father obviously went for snails, insisting you had to have snails in a place called ‘L’Escargot (he’s an English teacher, takes everything literally). I have to say snails are one of those things I can eat but only as part of a dish, the texture on its own is a bit too odd for my liking, it’s sort of up there with tripe. Having said that my Dad looked positively delighted to be presented with a plate of snails along with his own gadgets to eat them with (boys and their toys), his only criticism was it could have done with a tiny bit more garlic but otherwise very nice. 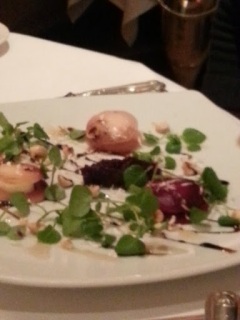 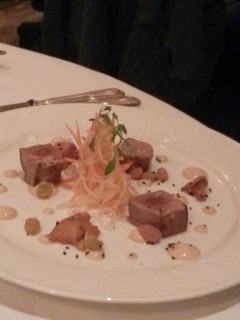 My sister’s Tuna also proved a big hit, although it was less lightly seared and more medium rare, but this may have been more pleasing to any clients with a fear of raw fish. My mother had the enigmatic beetroot and goats curd ravioli, about which the waiter went to great pains to tell us that it wasn’t actually ravioli (I don’t think my mum was that annoyed about the lack of pasta) but was paper thin beetroot surrounding the goats curd. It was a classic combination but well executed with a professional finish.

The mains arrived with the same pomp and ceremony as the starters, plated up beautifully. I started by thinking mine was lacking in side dishes as it was essentially a huge mound of pheasant and chorizo type sausage on a small amount of cabbage and a few smears of parsnip puree. However I soon realised this was because the pheasant was so delicious and meaty (although the highlight was the jus which I could happily have licked off the plate) that it only needed garnishing with the sides, a starchy potato dish would have been too overwhelmingly rich. It possibly wasn’t the most ladylike meal to eat in such a nice restaurant (I tried to pick as much meat off the bone as possible) but luckily the only people who could see were my family who aren’t allowed to judge me too harshly.

My family were equally complimentary. My sister’s sea bass with fennel boulangere was apparently perfectly cooked, and I can vouch for the taste of the fennel myself. She particularly enjoyed the Lie de Vin sauce apparently delicious and alcoholic. 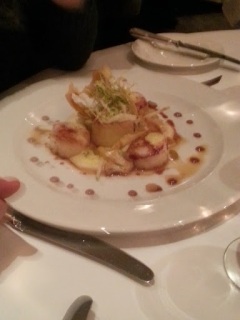 My Dad liked the samphire and Salmon combination which was complimented by the sweet ratatouille. My mother went for a rather unusual scallop dish (I generally don’t see scallop on the menu except as a starter), but it seemed like it fulfilled the unusual potential of being filling enough as a main, sweetened by the raisins.

Having had such a good meal I wasn’t going to turn down the opportunity for dessert. I rather liked how they added matching dessert wine underneath if you desired. We did have to find our way back to Oxford so decided not to do that but my sister did have one glass of excellent sweet sherry. My mum and dad went for the more traditional items on the menu, Apple tart and Sticky Toffee pudding. I was a bit put off by the fact the tart was served with both calvados cream and creme fraiche but apparently the tart itself enough but made up for it as it was perfection. The sticky toffee pudding likewise got the thumbs up. While my more unusual apricot soufflé and white chocolate toffee crumble was tangy and well cooked for the souflee, but accompanied by a rather odd and disconcertingly bright green shot, which turned out to be a sort of pistachio milkshake, nice for a sip but a but overpowering to have a whole shot of. 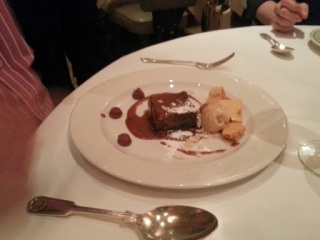 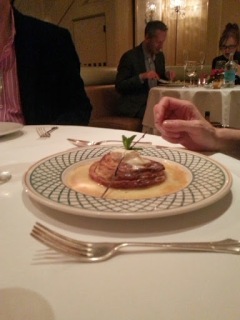 All in all I was very impressed with L’Escargot, it managed to do what it said on the label – fine dining, affordable glamour. Greatly enjoyed by all – I would come again if just for that jus on the partridge.