There is little excuse for how abysmal I have been at blogging lately, well except finals. Exams which will hopefully prove that three years and £9000 wasn’t a waste of time and I shouldn’t have just gone to cookery college or started working in the Pepperberry.. Perhaps post finals there will suddenly be a tide wave of blog posts, or perhaps I will be a bit too busy punting, drinking Pimms or playing croquet, watch this space.

However even finalists are allowed to have a bit of fun so last week I added a new college formal to my modest collection. The organist encompassed the meal in one sentence which fitted rather well; basic food but done well.Upon arrival the ambiance impressed. While Queens may have their hall in the modern part of the college (it’s no 19th century building) it is far nicer than any other modern college hall I’ve been in, the lighting is dimmed but you can see the food and the place settings were very posh.

The menu didn’t immediately scream Amazing, very different from Kings, simply stated, I think I preferred it to the flowery language, There was a rather weird sounding Meatball, mango chutney and cucumber to start. But I was assured by the lovely lady who had invited me that she had had meatball at formal before and it was of above average quality. She was right….about the meatball. The meatball itself was well cooked, still tender and moist with a lovely mildly spicy flavour. While there was only one, it was perfect portion for a starter. What was lacking was the accompaniment. a far too dot of mango chutney (that complimented the meatball) was masked by a huge dollop of cucumber mixed with yoghurt. I think it was meant to be raita but it was too heavy on the cucumber and was pretty much flavoured with nothing else, I fail to see what it added to the dish. Plus it looked a little odd, like a sort of green egg with a mango chutney yolk. 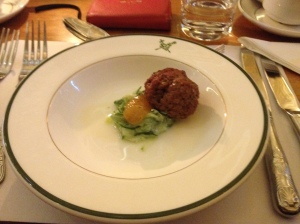 Moving on to the main it sounded fairly uninspiring on the menu, Poached Fillet of Salmon with Saffron Cream is more what you would expect as the last resort fish option at an 80s retro dinner party. (Think devilled eggs, vol au vent, sherry trifle) But I am willing to admit when I am wrong and Queens surpassed itself. The salmon was perfectly cooked, (if I was really picky the skin could have been crispy but then I would be expecting to pay £15 for the dish not the meal plus wine) the saffron sauce was really tasty and needed no additional seasoning and the green beans were al dente not overcooked, virtually impossible in mass catering. But the real surprising winner was the seafood risotto. I was expecting overcooked (seafood and risotto), underseasoned and lacking in any actual seafood (a la standard mass catering). It was overcooked, but it sort of worked. The stodginess just made the risotto more comforting, like a savoury rice pudding, well seasoned studded with a surprisingly large amount of well cooked seafood. It was unexpected and potentially not formal but very tasty.

Finally the creme de la creme (this pun makes sense later). I had been looking forward to the sticky toffee pudding for a while. It may well be my favourite dessert ever… if made well. Well Queens did it. It was sweet, moist but not over the top. Think sunday roast when you were 5 and your mum was learning to be domestic but had learnt Delia’s basics and Delia knows her stuff for the home cook. What would have elevated this dish from family comfort food to smart mid-week dinner party would have been something else, ice cream or cream. This was luckily a view shared by The Organist who insisted that I wait to touch my pudding until he had persuaded the waiting staff to venture into what we can only assume is the secret cream emporium of Queens given the 15min wait, to get us some pouring cream. While I failed to resist trying a small bite before the cream arrived I will admit he was right, the cream made a good dish even better. 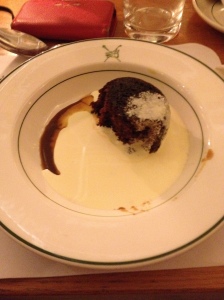 Queens has nailed the everyday formal experience for students. It isn’t fussy or pretentious, but it’s a step up from cafeteria food. It doesn’t serve you individually so your food gets cold, but it isn’t insistent upon presentation over flavour. It isn’t perfect but it’s pretty damn tasty and comforting. To quote Great British Menu (my latest addiction) it nails the brief. Basic food, cooked well, pretty damn tasty.