For the love of Campari

If there is one thing my mother loves in the world more than her children (although possibly not her job) it is Campari. A treat when on holiday, straight, over ice with a Mediterranean view and her children cooking the dinner. So it was inevitable when my sister and I and our 4 friends turn up at a holiday house in Croatia at 10pm after 6 hours or so of travelling, the only drink we had to offer to them on the first introduction to my parents was, Campari? 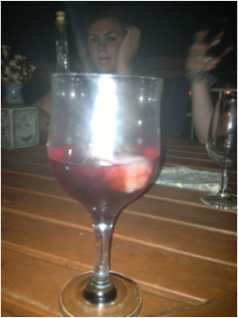 Luckily our friends soon developed a (possibly polite) taste for Campari and we settled down into a routine of beach, card games, scrabble, aperitifs and 3-course dinners. Since this was the same place as we had visited the year before I knew exactly how the lie of the land was food wise. Each morning my mum and I (and occasional extras – although the number of volunteers diminished as the holiday went on and the nights got later-) would go down to the fish market followed by a coffee, veg market and the custard doughnut shop, a staple of every Croatian holiday. The veg market in Starigrad, Hvar is a wonderful variety of fresh fruit and veg, olive oil and honey. Except for the clouds of terrifying wasps food lovers paradise. I was especially popular by the end of the week with our chosen stall (possibly due to the mountains of fruit and veg I bought each day), so much so, we would be presented with huge handfuls of grapes, which, once shaken clean of the ravenous wasps, would be gratefully received. The lady and I, although hindered by language barriers, communicated in a lovely mix of sign language, Italian and basic English. Whatever I did, she seemed charmed, and gave me a hug at the end of the week.
I had many glamorous assistants in the kitchen, from the actual keen cooks (who even gutted about 100 sardines at one point..) to the more occasional cameos (who discovered whipping egg whites is very time consuming..) We ended up eating a huge array of dishes. The barbecue was put to good use (the part of the cooking considered ‘man’s work’), 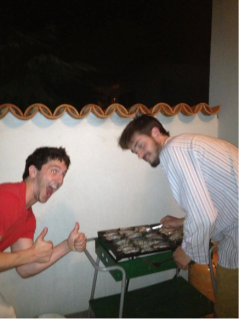 with a favourite being the grilled sardines, fresh from the morning.  The veg ran out every day as we made vats of roasted veg (oil, vinegar, salt, pepper, garlic, rosemary), cherry tomatoes (capers, onions, basil, oil, vinegar, sugar, garlic, salt and pepper) and potatoes (oil, garlic, rosemary, salt, pepper). One of the unusual dishes we had was Thai pork belly and egg fried rice cooked by one of my sisters friends, delicious and my dad didn’t even complain at the spiciness! We even attempted various puddings, such as tiramisu, peach tarte tatin  and honey and lavender pannacotta using local produce. We even tried to make Croatian delicacies, of which the Ajav sauce was a big hit. Roasted aubergine and blackened red pepper pureed with oil, paprika, salt, pepper, sugar and vinegar. Another delicious invention was the fava bean dip. A sort of chunky houmous made by boiling the beans with lemons and mashing them up with olive oil, salt and pepper.

The most interesting foodie experience in Croatia though had to be the sun dried tomatoes. One of my friends had bought her own homemade sun dried tomatoes that were so good we had polished them off by the second lunchtime. The only thing to do was make some more. So on my friend’s instruction we cut up cherry tomatoes, salted them, put rosemary on top and laid them in the sun for a couple of days. Hey Presto they shrivelled up! We washed them in white wine vinegar (or what we assumed it was – it was called alkoholic and looked like vinegar-) and jarred them with olive oil, garlic and rosemary, delicious.

It seemed such a shame when we had to go home to leave our little routine, but I held on till the very last minute and had the leftover roasted vegetables for breakfast on the ferry home while the others had pastries. I love roasted veg almost as much as my mother loves Campari.