The celebration of the Scottish poet Robert Burns which I only came across in Cambridge, England…..  It is the sort of occasion where the menu reads like a witches chant from Macbeth, the men wear skirts and everyone toasts a sheep’s stomach with what some consider to be the nectar of gods and what others (me) consider to be absolutely disgusting. I’m not entirely sure why this English institution feels like it should celebrate such a scottish tradition but I am very glad we do, I love haggis. If someone had told me at the age of 6 that I would love to eat sheep’s offal minced with oatmeal and boiled in a stomach I probably would have thrown up, but ever since I tasted offal for the first time at 16 (a black pudding stuffed pork loin) I absolutely loved it. (The exception being Tripe which I tried once and never again…) Offal tends to lift a dish with its’ rich, earthy flavour and  works well in small doses such as the lovely offal risotto The Fat Duck serves with its’ lamb dish, or a slice of black pudding pan fried with brunch or even pan fried liver with caramelised onions (lots of iron – good for you). Offal should really be on people’s menus more often, plus just think how sophisticated you’ll look with deep fried sweetbreads on your menu.

We started off as usual scrambling for places on the tables, decorated with topical tartan tablecloths. Settling down with warm rolls and butter and a glass of wine we awaited the first course eagerly; the enigmatic Cullen Skink espuma, home made haddock and oat rumbledethumps. Roughly translated what this actually means is foamy potato and fish soup with haddock and oat fishcake/dumplings. Tasty stuff. I especially applaud the Scottish for their love of strong flavours, it makes a dish so much better. I found dipping the oaty dumplings into the light soup was particularly gratifying. The man with the colourful hair’s vegetarian option was incredibly good (I’ve mentioned my aversion to king’s vegetarian options in the past – a whole slab of goats cheese….) He had a colourful green leek and potato soup along with his own cheddar cheese ‘rumpledethumps’. 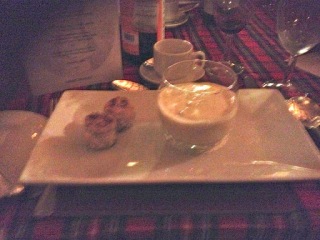 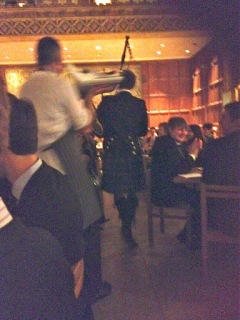 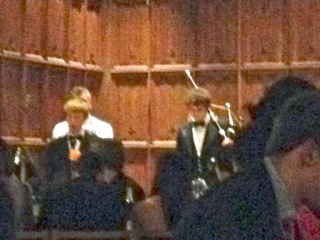 Having satiated rumbling stomachs for a little while we were treated to what some might call the main entertainment. The first I heard about the traditional ‘Address to the Haggis’ was about 12pm that afternoon, when I was asked. as a music student, if I knew anyone who played the Bagpipes……I wish I did. Luckily they managed to find some Bagpiper who played the haggis in as it was paraded around the hall in procession. At the top of the hall came the traditional poem spoken to the Haggis (to read the full thing http://www.robertburns.org.uk/Assets/Poems_Songs/toahaggis.htm) which is brilliant when seen alongside the Anglicised translation. The haggis was then pierced and we all raised a toast to the haggis with a shot of whisky. Whisky is possibly the only thing that the Scottish and I disagree on. Then again whisky appears to be the marmite of alcoholic drinks. I have never met anyone who merely likes whisky, generally there are the devotees and those who find it hard to stomach and unfortunately I fall in the latter. Having said this as this was burns night (and egged on by friends around the table) I did finish my whole shot. I don’t know whether it was because I hadn’t really had whisky before or because it was strong but it did slightly knock me for 6. Therefore I was incredibly grateful to have the main arrive. MacSween Haggis, neeps, tatties, giroles, curly kale and Glayva sauce. Translation: Offal minced with oats boiled in a sheep’s stomach, turnips, potatoes, kale, mushrooms and whisky sauce. It was wonderful. The Haggis was peppery and rich, the potatoes were mashed, buttery with a hint of mustard and the sauce was thick and savoury, complimented well by the less strong turnips. It all went together perfectly and was warming and filling. I particularly liked the combination of the mustard and pepperiness. The man with the colourful hair is also allergic to nuts so couldn’t unfortunately have the vegetarian alternative Haggis. However his mushroom risotto was filling and warming if a little disappointing (a bit carb heavy). 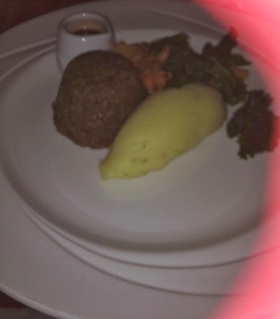 Dessert came and I was very pleased. It had a wonderful combination of textures and a lovely strong honey flavour. Honey and Oat Parfait with soft chocolate and Drambuie Celtic layer. I particularly liked the parfait, although perhaps the dark chocolate fondant was a little rich considering such a rich main, I would have preferred just the ice cream or maybe more of the wonderful parfait. The best part about the Scottish is after such a rich meal they know exactly what to do, dance. Great fun, although admittedly Kings scottish dancing following a large consumption of wine was possibly a little more slap hazard than the Scottish. Having said that it probably depends how much whisky they drink… 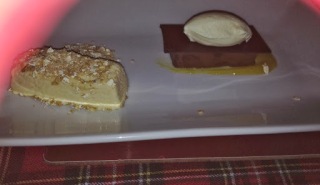