Three years of pretentious, over-priced but very special 3 course meals and it all came down to a St Paddy’s day feast for my last formal ever at Kings. We’ve had hits, THAT venison steak, and spectacular misses, coffee in the starter…. but Kings has at least kept a consistency of too many things on the plate and geometric shapes, a level of pretentiousness far above any other in a Cambridge. However it is certainly an event every week, nowhere else is black tie virtually the norm for a weekly student dinner, nowhere else is there such a paradox within the generally perceived message of the organisation (nb communist flag in the bar), nowhere else would weekly dinners stop 8 weeks before they should. Lets not lie, I wouldn’t have it any other way, it’s more exclusive. I even splashed the boat out on wine – seriously rewarded, smooth balanced taste that was light but robust.
I wasn’t necessarily thrilled that our last ever formal was St Patrick’s day themed but I was pleasantly surprised in some areas, quite disappointed in others. 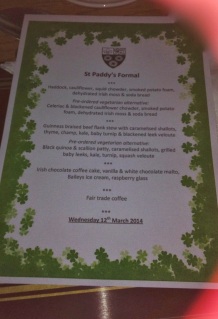 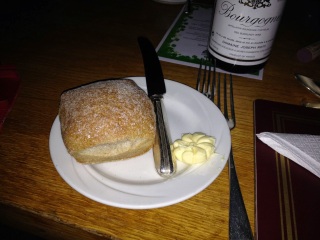 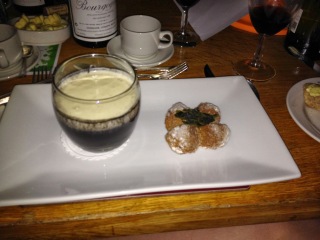 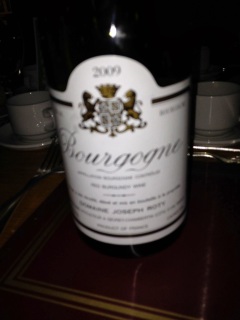 The first course had my favourite and least favourite parts. It was generally decided that the moss was possibly the most disgusting thing many of us had ever tasted, sort of like swallowing a mouth of sea water, a dehydrated mouth of sea water. We also believe that that is the reason the soda bread had an after taste of earwax (too harsh?). However the black guinness looking soup with potato foaming topping was delicious. The squid added a savoury element that lifted an other wise delicious but basic haddock and potato chowder to an morish soup that I could’ve kept eating for the whole meal (in some cases maybe I should’ve). 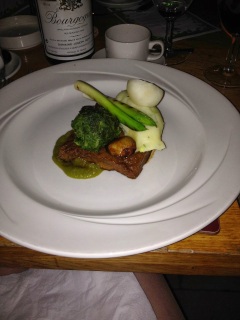 The second course was slightly deceivingly small on the plate – it had body, a huge body of supposedly  melt in the mouth meat, it was alright but it was quite stringy all in all although the caramelised shallots complimented it as did the buttery mash. Plus I love blackened leeks, but once again Kings decided sauce wasn’t necessary, they were wrong.

I didn’t realise how full I was going to be by this point and couldn’t finish the rich chocolate ganache they had called a cake.. It did go well with the delicious Baileys Ice cream and the raspberry glass was for once a welcome novelty, but ration of ice cream to ganache probably should’ve been the other way around…. 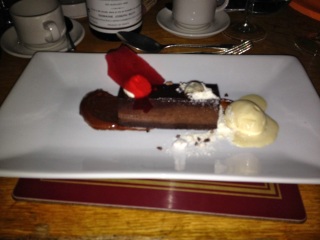 It was a lovely night with my friends but I feel they should’ve let me redesign the dessert, oh and actually the main and why not the starter as well for good measure…