The Breakfast of Kings
This is from a couple of years ago but it is one food memory I will not be forgetting anytime soon. 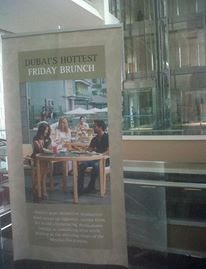 I think my idea of heaven would be a never-ending supply of every cuisine, expertly cooked washed down with limitless champagne. I didn’t realise you could get sick of perfectly chilled proper champagne till I experienced the ultimate brunch in Dubai. We were in Dubai on choir tour (don’t ask). I had already made the mistake of pre-empting this brunch so had not eaten breakfast before our morning concert. This was not a good idea. I fainted. However the brunch was worth it. We walked into a deluxe dining room and sat outside in the basking hot sun overlooking an incredibly fake golf course. We were given unlimited champagne for the equivalent of £20, which wasn’t bad considering we had full access to the brunch buffet free. When I say buffet I talk in the loosest terms, this wasn’t a buffet it was a feast. There was a sushi bar, where the chefs prepared the food before your eyes, a Chinese stall, a Greek stall, a seafood buffet (I had never tried lobster before but I’m pretty sure I ate at least two here), an antipasti bar, a British food bar (they do roast beef better than us) and a whole lot more. Then once you had eaten first course you could move on to the pudding stall, a traditional rice pudding Arabic dessert, cheesecake, chocolate cake, jelly, apple crumble, macaroons (you know how much I love macaroons) and so much more. Kids weren’t left out, there was a kids stall with hot dogs, ham burgers, ice cream, a chocolate fountain, candy floss a playground, my stomach wasn’t big enough.
Most of Dubai I would say confused me. It was lovely but it was a film set. Large expanses of desert were interrupted every now and then by shopping malls or schools that could rival the Taj Mahal but this multicultural society certainly boomed when it came to food fusion, it may feel like it hasn’t got much original culture, but it has taken some of the best bits of others (mostly the food).