In my last post I described the beer cake. It had one of the best responses to a cake I’ve had, simply because I walked in the room for the sparkling wine drinks, the birthday boy and gathered assembly were drinking large pints. However following the drinks we all headed over to Browns to continue the celebrations.
It was a little surreal approaching the restaurant for their weekly lobster night to walk through a throng of hand horns and placards being thrust in our plates by protestors protesting against lobster killing, but luckily once you got in the restaurant the regular blasts of horns and shouting dispersed into vague background noise.
I was quite hungry at this point and there was just one starter calling out to me and my neighbour, the sharing plate. This I would strongly recommend! I particularly enjoyed the calamari which were crisp but not chewy inside and went well with lime and chilli mayonnaise, which lacked heat but was tasty nonetheless. The honey mustard chicken again lacked a huge hit of the promised flavour but was still tasty and very well cooked. I really liked the prawn cocktail, chunky prawns and a hit of marie rose sauce which didn’t try to pretend it was anything other than what it should be, mayonnaise, worcester sauce and ketchup (it may have been more fancy then this but I loved it’s lack of pretentiousness). Again I really enjoyed the duck crispy chilli duck which was full of flavour but perhaps should’ve been described as hop-sin duck because that is what it was in reality. The chorizo sausage roll was very good and definitely lived up to its description, as did the lavish breadsticks which were so much more than breadsticks, more like morish buttery pastry sticks (this was not one for the figure conscious) which went so well with the rich lime and chilli mayonnaise for absolute decadence, carried the actually quite spicy harissa houmous and were complimented by the more plain and light aubergine caviar. Altogether perhaps browns could do with rewriting their description, but the finished product was delicious, although most definitely for sharing, perhaps we were a bit ambitious only sharing between the two of us… 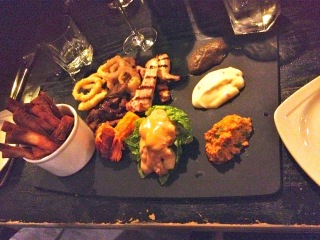 For the main I was told that I absolutely had to have the lobster surf and turf and was even offered sponsorship to order it (which of course I gratefully accepted -don’t judge, food lover+student – all donations accepted). The problem I had with the main was that having advertised this as a dish for lobster lovers, the lobster was significantly smaller than others I’ve had in the past (see dubai and Brussels) and was slightly overcooked and lacked flavour. For £25 you would have thought they could at least have run to a sauce for either the steak or lobster. Having had my rant the turf bit of my meal was lovely. I do like my steaks virtually mooing on the plate and I know a minute steak is quite hard to cook medium rare so I really should’ve asked for rare. Despite this they managed a good medium rare which I was impressed with and the fluffy thin chips were really good especially when dipped in Brown’s homemade ketchup, which I have had before and absolutely adore, it is so much better than Heinz (which for the record I love on brunch – this just goes the extra mile!) The steak doesn’t quite beat Cau, but at the moment that is a tough act to follow. 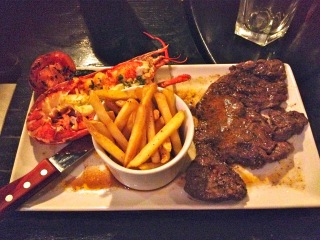 All in all in Brown’s, choose wisely and you will be rewarded. (I probably chose a little unwisely as I should’ve remembered Cambridge is as far from the sea as humanly possible.) Sometimes the most expensive choice isn’t necessarily the best, but what they know well they pull off well. (And trust me they know chips, calamari and breadsticks very well apparently)