When In Bruges…
If you haven’t yet been to see the 39 steps in the Criterion theatre I would strongly advise getting a ticket (not that it seems to be going anywhere soon, they just celebrated their 3000th performance….). After you’ve been to see the fast paced, british slapstick comedy piece of genius, you might be peckish (we certainly were at 10pm). We headed over to what can be described as possibly too trendy for the group of Cambridge students that encountered it but I was very glad that we did go there because despite the overly trendy feel of exposed piping and industrial staircase the food was delicious and very good value. A restaurant called BELGO. I’ve been told the beer was rather good but I’m afraid the meagre sip of honey beer I tried just tasted like beer to me – I clearly haven’t had enough beer to taste the subtle nuances of different flavours. I did like the exciting looking test tube that one of the beers came in, and exciting presentation does always make me like things better, but I’m still not sure I would’ve liked any of the beers their no matter how superior their glassware.

Having ordered and declaring ‘I am a Snob’ to order the Snob mussels (well employed someone else to do it on my behalf – I was chicken), we were impressed when the starters came within minutes – did I mention it was 10pm? I made a very wise choice with the duck salad. It came warm with soft and crunchy croutons ( I do mean this), a perfectly on the cusp of soft boiled egg, some sort of delicious dressing (I would love the recipe) and hidden treasure troves of black pudding. Passing the salad round it got approval from all areas. Although a close second was the chicken liver pate which came with giant sourdough croutons and was rustic but spreadable with a salty smooth flavour – pretty sure I can create this one at home, watch this space. The melting gruyere cheese croquettes were never going to be my choice not only were they too cheesy for me, but also served with beer relish… however I was assured from all sides that they lived up to the hype and a very popular option round the table. There was also the lobster bisque which looked like a rather dull butternut squash soup but one sip was enough to show the there was a really deep seafood flavour, it wasn’t grainy and it wasn’t too thick or thin, I was almost jealous but luckily I was having the snob mussels for main, champagne, cream and lobster. 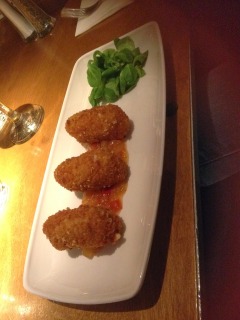 The blondie decided to splash out on the ‘add half a lobster for £10’ deal, although all of us were questioning whether surf and turf really expanded to include pork belly… As I’m afraid has been the case before I think the lobster was some what of a disappointment. The lobster lovers out there will probably heavily berate me for saying this but as my opposite dining partner said, lobster really only tastes properly fresh if it is cooked from living in a pot of boiling water (now I’m off to hide before the witch hunt comes) and this one was probably frozen… The sauce on my mussels was absolutely heavenly, full of flavour, decadent and the mussels weren’t chewy or overcooked. My only gripe was possibly I would’ve preferred to be offered bread to mop up the sauce, the fries were nice, but they were nothing special. I believe the same was said of the classic mussels, they were excellent too. I’m afraid I didn’t here much about the pork belly and half chicken as they were sitting down the other end of the table. 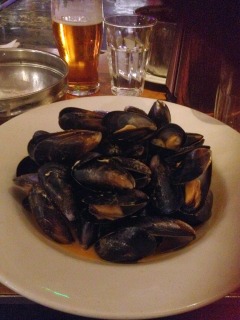 We finished the meal around midnight with a surprise plank of shots appearing from somewhere. I am still not entirely sure what these shots were but the menu described them as SCNAPPS SHOTS: MIXED SHOT STICKS IN A VARIETY OF FLAVOURS. I believe I smelt, apple, vanilla, chocolate… etc
Probably should’ve gone for the waffles/ice cream, the salted caramel flavour looked really good. Belgo – I shall be coming back! 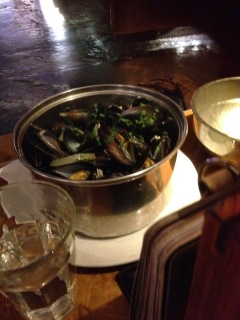 One thought on “When In Bruges…”