The benefits of singing in a choir may not be immediately obvious to those who don’t. There are the weekly hours you have to put in, the pressure of daily performance, the taking care of your voice. But for those in the know, it is all about the free food and drink: in this case, a decadent 6 course meal with rather nice wine in return for providing some musical entertainment. This is a once-in-a-term occurrence, but when the opportunity comes along we grab it with both hands.
So there we are, all dolled-up to the nines, the Fellows in gowns with red ribbons (for no apparent reason) – classic Cambridge madness. Following the champagne reception, and many photos, we traipsed into Hall. Caius’ food doesn’t usually wow me, but in this case it was rather different…

We started with a smoked chicken salad, mango purée and mango pieces. Whilst not a classic combination, it is certainly a modern favourite and was executed well. The chicken was tender, and the mango was not too sweet. Full marks for presentation to a college that normally serves their Formal Hall meals with a selection of sauce sachets on the table. 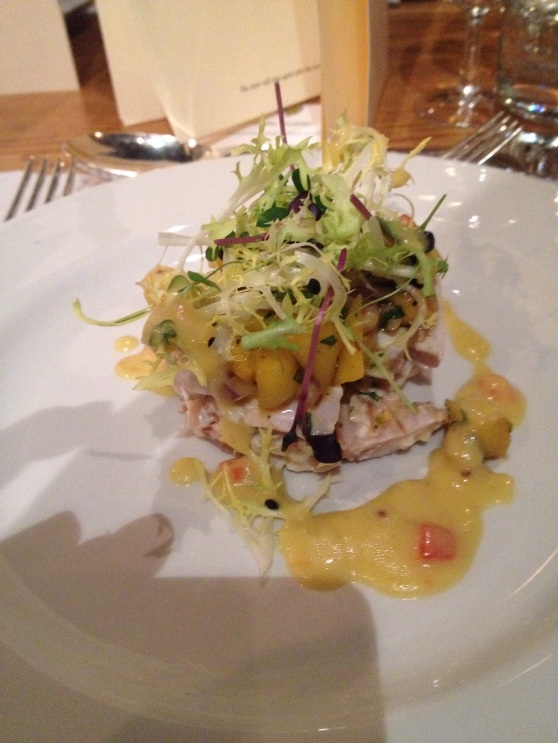 Next we were treated to a delicious pan-fried white fish. I am not entirely sure which type of fish, as for some reason only known to Cauis they insist upon putting the menu in French, for those of us who aren’t multi-lingual – this means guesswork). Unfortunately the fish was served with a vanilla and orange cream. This was just too sweet for the delicate fish and resulted in the whole dish tasting rather like a Terry’s Chocolate Orange.

Surprisingly my favourite course was the palate cleanser of Mojito sorbet. While admittedly it possibly would have been better as a dessert, it was minty and sweet and refreshing. There wasn’t much of an alcohol kick to it, but I’m not sure we necessarily needed it by that point…

For the main course, what else but a nice cut of beef. Sadly this was a little over-cooked: not awful, but I’m afraid not great. However the potatoes, classic new potato roasties, were delicious. 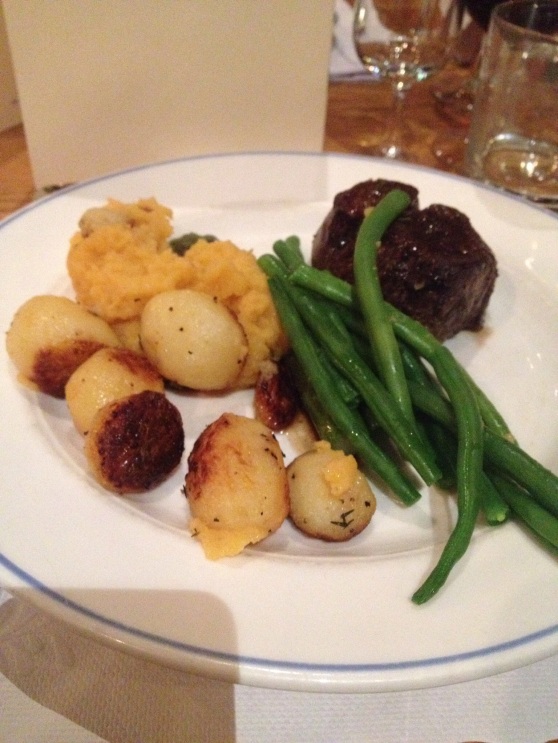 Following this I believe we did a bit of singing, but that wasn’t really what I was there for. It was a shame that the dessert wasn’t anywhere near as good as previous feast desserts, which have mostly been some sort of variation on a Black Forest gateau. This was just a thick and overly-sweet fig jam in a pastry case with sugary cream on top. I was not the only one not to finish it. (There comes a point where even I can’t eat much more!) 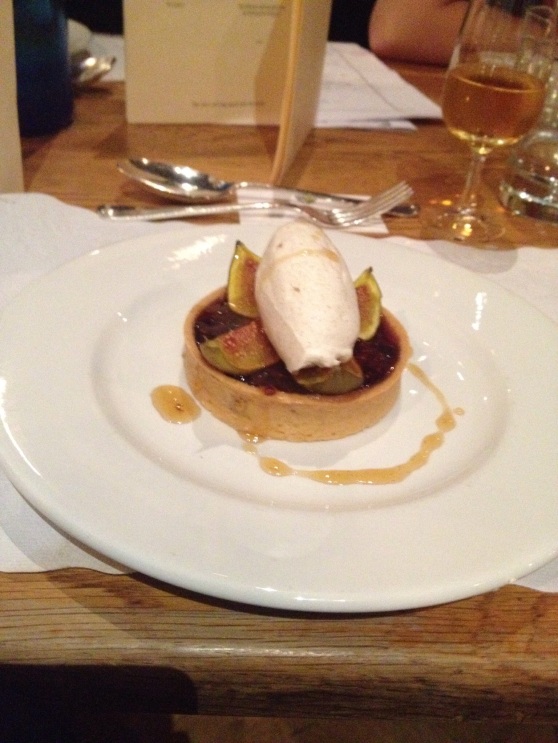 You would have thought that would be the end of the meal, however it wouldn’t be a feast if there weren’t more courses than sense. Following some cheerful Wood madrigals, (Charles Wood, GCC 1889-1924), we launched into the cheese course, accompanied by claret, muscat and port. Luckily this is always my least favourite course, as I did not really want to eat much more by this point. Not only am I not a big fan of cheese – Sacre Bleu! – but also I find dessert wines just too cloying and sweet. A glass of port is alright, but any more than that is too much for me. This is why I have learnt to like whisky: my new after-dinner drink of choice.

So that was us quite literally singing for our supper. I think the overall message is that when every course has a sweet component, culminating in a sickly dessert, I would prescribe a low-sugar diet!