I will not call our Christmas dinner at the house the ‘practice round’, despite it being nearly a week early since all three housemates are leaving to spend the actual day with their parents. It was rather impressive in its own right, especially as it only took us around 2 hours to make. Despite Mark Francis’ pleas we did not get a turkey for the three of us; impractical considering 2/3 of us were leaving a day later. Instead I picked up a chicken on the way home from work. I turned up to discover a beautifully laid table with champagne, wine and dessert wine glasses, place mats and candles. The house had been decorated top to toe in tinsel and some wonderfully garish red fairy lights (Santa’s grotto in our home). We even had a mini wooden tree, Aldi’s finest crackers, (I’ve always wanted a fortune telling fish), and numerous Christmas cards. As I pootled around the cupboards preparing the main course, I even found unnecessary christmas bargains picked up from Aldi – a gift set containing stollen bites and rum, more mince pies (we have a never ending supply), and star-shaped biscuits (which turned out to be great in coffee cocktails).
So with St John’s College Choir’s carol CD blaring from the speakers (interspersed with snippets from the Gospel Messiah Claire Balding had found on YouTube), I set down to work, over-catering as always.
After some craftily-posed cracker-pulling selfies, it was time to actually eat. The starter was pulled out of the fridge, made ahead and stylishly plated up in cocktail glasses. The lovely Claire Balding’s take on the traditional prawn cocktail used horseradish and tomato and chilli relish for a less synthetically tasting Marie Rose sauce, and was delicious.

Gradually I began loading the table with dishes for the main course. I decided this year just to make up the recipes as I went along; sometimes it’s more fun to live life on the edge. I think at this point even Mark Francis was pretty pleased we hadn’t gone for the turkey. We had a roast chicken. Over the years I have tried and failed many times to roast a chicken perfectly – the results have usually been either too dry or undercooked. After some years perfecting it, my fail safe method is to rub the chicken liberally with sea salt and pepper, adding a tbsp of butter massaged under the skin (a bizarrely satisfying thing to do), stuff the cavity with various fresh herbs (I used bay leaves, thyme, sage, rosemary), and then put in the oven for 1 hour at 180ºc with a 1 inch level of water (or white wine?) in the bottom of the roasting tin. After 1 hour, uncover and cook for a further 20-30mins until the juices run clear. Leave to rest for 20mins and you have a ready-made gravy base! 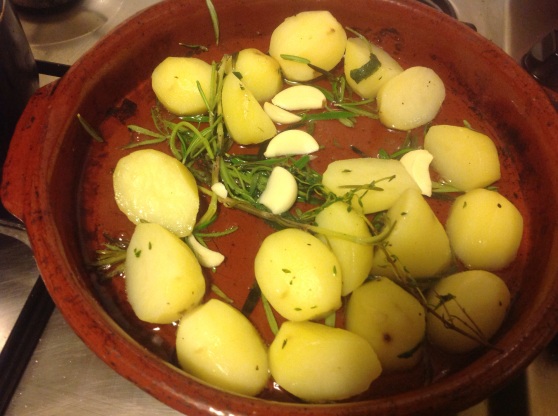 Next up were the roast potatoes. I have tried so many times to make these healthy, but I’m afraid while using olive oil produces fairly crunchy and tasty potatoes, nothing can beat goose fat for top-notch roasties. I peeled and cut some King Edward potatoes into uneven knobbly lumps (very important as the more edges, the better the roast potatoes will be). I boiled them for 7-8mins, adding salt, garlic, bay leaves, peppercorns, rosemary and thyme to the water. Meanwhile I heated 1 large tbsp goose fat in the oven until melted. To this, I added the drained potatoes and herbs and roasted at 180ºC for 30-40mins. Even Mark Francis broke his usual 3 potato limit for these. In my opinion though, the Chef’s treat has to be the virtually deep-fried crunchy herbs you are left with at the end.
No Christmas dinner would be complete without parsnips. These are again something I rarely have except at Christmas. But that may be because I am snobby enough only to like my roasted parsnips. I positively turn my nose up at those barely-cooked chunks of parsnips that are usually served up at mass-produced roast dinners. For me a perfect roast parsnip should be thin and slightly caramelised: chewy and crunchy at the same time. So this year I sliced some carrots and parsnips into batons, tossing them in salt, pepper, thyme, truffle oil, olive oil, a splash of red wine vinegar, and a drizzle of honey. I roasted these at 180ºC for 30-40mins until caramelised, stirring every so often.
I am a fan of creamed spinach. I understand it is not everybody’s cup of tea, but since I was forgoing the most delicious part of the Christmas spread (the bread sauce), this was the nearest substitute I could manage at short notice. Simply melt 2 tbsp butter and whisk in 1 tbsp flour, add milk, whisking at small intervals until you get a white sauce. Add salt, pepper and nutmeg. When ready to serve, pour boiling water over a colander of spinach to wilt. Stir the spinach into the white sauce, add cream if desired.
The cranberry sauce is another thing people rarely seem to want to make, which for me makes absolutely no sense. It’s so easy and always sooo much nicer than the stuff from a jar. All you do is put 300g sugar and 300g cranberries in a pan with a splash of vanilla extract, port and water. Add 1 tsp cinnamon and 1 tsp ground cloves. Bring to the boil and stir for 2-3mins, and hey presto! Cranberry sauce that will keep for ages.

On to the stuffing. Mark Francis couldn’t quite believe I was willing to squeeze the meat out of sausage skins in order to make this, but agreed that the end result was worth it. I believe the line CB used to describe them was ‘cakes of fun’, although I think the revised version ‘balls of fun’ has a better ring to it. To make the stuffing I simply mixed the meat of 8 sausages with a handful of cranberries, 1 egg, salt, pepper, a handful of chopped sage leaves, a sprinkling of parsley, 200g chopped chestnuts and 3 tbsp golden breadcrumbs. I shaped this mix into little balls and roasted in the oven at 180ºC for 30 mins.
My final addition to the table was the gravy. This really needs no recipe as thanks to the method of roasting the chicken above, the juices had already collected in the bottom of the pan. I simply whisked in 1 tbsp sifted cornflour to thicken, and added a stock cube to flavour.
Mark Francis’ main contribution were the ‘Ancient Roman style’ brussels sprouts, using an old family recipe. Unfortunately Mark Francis’ mother works along the same lines as me when it comes to cooking, providing him only a list of ingredients with no specific cooking times of amounts. This could have all gone so wrong. But in fact they went down so well I am planning using the recipe for my own Christmas dinner tomorrow. Simply take Brussels sprouts, raisins and olives, braise them in stock for 4-5mins until reduced, and then stir through some pine nuts. When in Rome or indeed Cambridge… 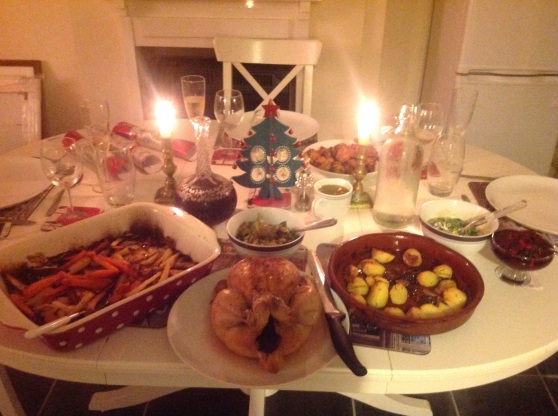 After sitting and groaning at our stomachs for a bit, we decided we would play some games before dessert. While ‘Pass the bomb’ using the Great British Bake Off music instead of a timer was great fun, I’m not sure ‘Twister’ was the wisest idea given the quantity of food consumed… Luckily Claire Balding had made a delightful light dessert of baked pears, which she had stuffed with ricotta and sprinkled with amaretti biscuits. We served it with a discovery of Mark Francis – Aldi’s Finest: a box set of sparkling Asti dessert wine and Cantucci biscuits. While at first we were unsure what “Aldi’s Finest” would entail, it was a wonderful dessert wine, only 5%, sweet but not cloying. Shame you can only buy it in the box set.

Altogether, a fine warm-up for the big day. I will let you know if I manage to persuade the 90 year old grandparents to play Twister!