Now I am essentially what they call a ‘working gal’, I was in the cafe right up to the hilt. This meant, unfortunately, that I was unable to indulge in my usual 3 day cooking marathon in the run up to Christmas, and SHOCK HORROR, had nothing prepared for Christmas lunch before the big day itself. This is unheard of from the girl who usually has everything chopped, prepped and cooked the day before, save the Turkey. I had luckily still found time to create the, now infamous, Christmas spreadsheet and book the grocery delivery slot. -my mother still doesn’t actually know the password, her grocery shops are so infrequent- Credit where credit is due however; I arrived home to a stocked and catalogued kitchen. Mother had received the food delivery and processed it in the only way a lawyer knows how to. This meant that once I breezed in off the dreaded 3 ½ hour coach journey from Cambridge at around lunch time, waving to the grandparents as I walked past them, I could set straight down to work on the Christmas Eve dinner.

I would say it is a tradition in our household to have a three course dinner on Christmas Eve, but considering I instigated it a few years ago when I took over proceedings, it is more of an indulgence of a personal whim. What is more of a family tradition is negotiating the short time frame in which to eat dinner between watching ‘Carols from Kings’ between 5.25pm and 7pm with a glass of bubbly and finishing before the 9.15pm rehearsal for Midnight Mass. The time constraint is combined with the limitations of: my grandmother’s aversion to peas and nuts, my father and his father’s aversion to visible celery, cabbage (I ignored this one) and onions and everyone’s fear of fish bones and remotely undercooked meat. Catering for everyone’s request whilst still gratifying my experimental mindset is a challenge every year.

This year we began with a starter inspired by The Organist’s New Years Eve extravaganza last year, crab mayonnaise. Made by simply mixing crab meat ( I chose brown crabmeat but next time I will go for white, more expensive but a better texture) with lemon juice, mayonnaise, black pepper and salt. I served this with an avocado cream made by blending 3 avocados with Crème fraiche, a small pinch of salt and lemon juice. The combination of the salty crab with the smoother avocado made for a pleasing blend. 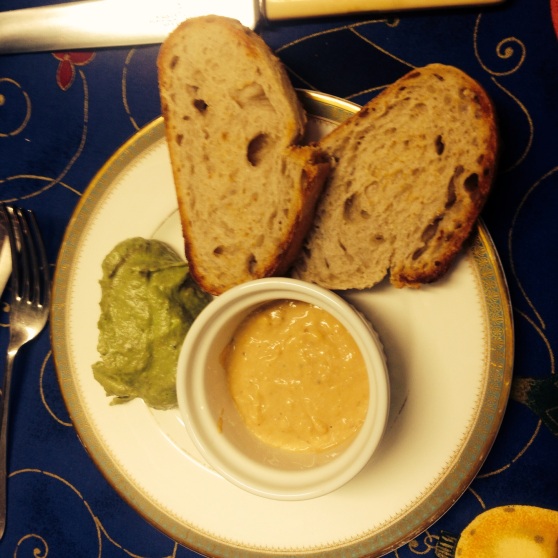 I followed this with a venison and chestnut stew, herb crumble, winter slaw and roasted squash purée.
For 6:
Brown 600g Cubed venison dusted with flour,pepper and salt in a little olive oil. Remove from the pan and set aside. Add 2 onions, cubed and 6 rashes of unsmoked, thick bacon and sauté with a pinch of salt until the onions are translucent. Deglaze the pan with a glass of port. Add thyme, a bay leaf and a spoonful of juniper berries. Finally return the venison to the pan with a beef stock cube, enough water to fill the pan. Place in the oven with a lid or covered in foil for 1 ½ hours at 180oC. Remove from the oven and add 250g cooked and peeled chestnuts, simmer on the stove top for 20mins until thickened.
For the crumble: Mix 300g breadcrumbs with salt, pepper, chopped parsley and chopped sage. Toast in the oven at 180oC until browned, mixing occasionally.
For the purée: Roast 500g cubed butternut squash with 1 chopped red onion, 3 chopped garlic cloves, a drizzle of olive oil, a drizzle of white wine vinegar, a drizzle of truffle oil and chopped sage at 180oC for 30mins, until soft. Blend.
For the slaw: Chop 1 red cabbage and mix with 1 grated apple, 1 tbsp of mustard, a handful of raisins and 2 tbsp mayonnaise. Season to taste. 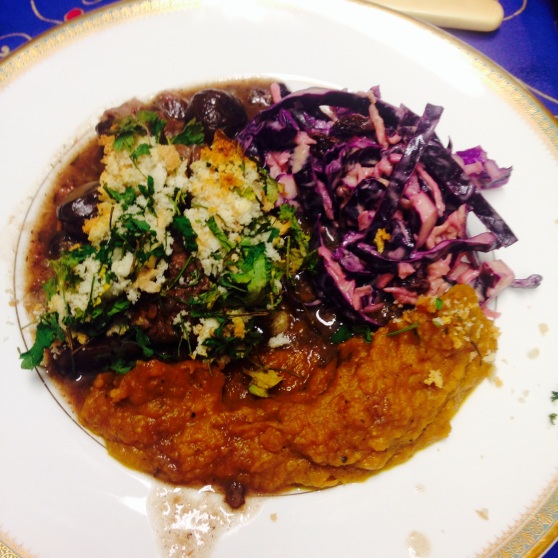 The day before Christmas Day I suppose one does not want anything too heavy in order to preserve one’s appetite for the main event. So for dessert I decided on a dish that was small and sweet. A champagne sabayon with popping candy, served with dark chocolate matchsticks. I kid you not, the matchsticks were a revelation. The intense bitterness provided by a lychee vinegar based ganache matched the overwhelmingly sweet sabayon well, adding richness and texture to the dish. NB you would not want too much of the sabayon as it is so sweet, in this case a cocktail glass full was ample.
For the sabayon: Whisk 6 egg yolks with 250g sugar, dash of vanilla extract, 200ml sparkling wine and a pinch of salt over a pan of boiling water for 8mins until it has doubled in size and thickened. Immediately remove to whisk over a bowl of iced water for 10-15mins until light and increased in volume again. Pour into glasses and chill. Sprinkle with popping candy just before serving.
For the matchsticks: Melt 200g milk chocolate and 200g dark chocolate together. Meanwhile bring 25ml cream and 50ml lychee (or other fruit flavoured) vinegar with a large pinch of salt to the boil. Immediately pour over the melted chocolate, leave for 1 min and then combine to a thickened ganache. Spoon into a piping bag, pipe into shapes and chill. When set, dust in cocoa powder. 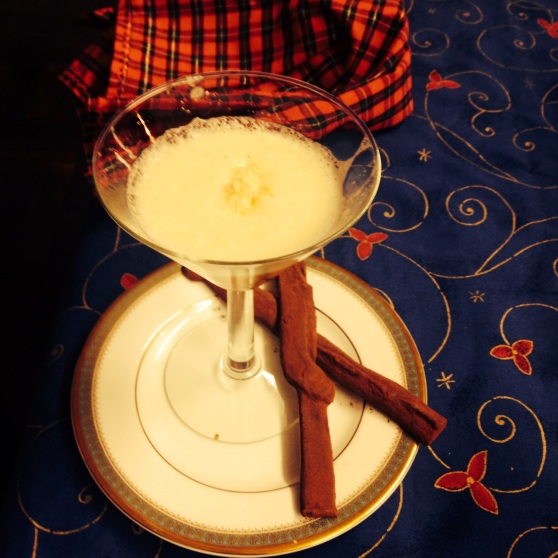